I went to hang out with my uncle last week and he had a small treasure trove of old family photos. He also had some idea of who most of them were. Kindly, he let me borrow them and I've scanned as many as I could.

I ran across the photo of a young woman and, my curiosity piqued, I had to do a little research. I discovered the story of Seaman 1st Class Harry Frederick Bradshaw, one of scores of thousands of young Americans who lost their life in WWII.

Harry was raised in Nashua and Belle Plaine, IA, graduating from Belle Plaine High School in 1939 and joined the Navy soon thereafter. While on leave on May 4, 1941, he married my grandmother's sister's oldest (twin) daughter, Jeanette Janis Scoles. According to researcher Evelyn Park Blalock, they were childhood sweethearts. They were married by a local Presbyterian minister. Jeanette went to live with his parents, Mr. & Mrs. Ray Bradshaw in Belle Plaine and also spent time in Nashua, while Harry served.


He was stationed on the USS Arizona until October 1941. He served briefly on the USS Wharton to get stateside to San Francisco. He headed to a training in Virginia from there.  His final leave was in November of 1941 and he returned home to his wife and parent. He returned to Hawaii via the USS Neosha, leaving port in San Francisco on 30 Nov 1941. The USS Neosha arrived in Pearl Harbor on December, 6, 1941.  He was supposed to return to the Arizona on the 6th, but because of the emergency, he did not reboard the Arizona, saving his life.. Having survived the attack, his emergency orders had him transferred permanently to the Neosha on the 7th. 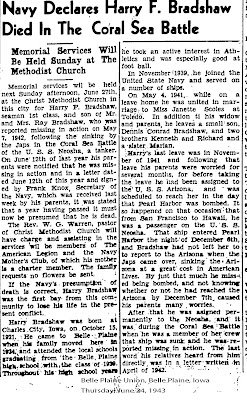 Harry is honored on the list of survivors inscribed at the U.S.S. Arizona Memorial in Honolulu, Hawaii, and on the Tablets of the Missing in Manila, the Philippines. The U.S. Navy also placed a cenotaph memorializing Harry in Oak Hill Cemetery, Belle Plaine, Benton County, Iowa.

She was laid down under Maritime Commission contract by Federal Shipbuilding and Drydock Company, Kearny, New Jersey, 22 June 1938; launched on 29 April 1939; sponsored by Mrs. Emory S. Land, wife of Rear Admiral Emory S. Land (Ret.), Chairman of the Maritime Commission; and commissioned on 7 August 1939, with Commander AV. E. A. Mullan in command.

Conversion at Puget Sound Naval Shipyard was completed on 7 July 1941, Neosho immediately began the vital task of ferrying aviation fuel from west coast ports to Pearl Harbor. On such a mission she arrived in Pearl Harbor on 6 December, discharged a full cargo to Naval Air Station Ford Island, and prepared for the return passage.

Next morning, the surprise attack on Pearl Harbor found Neosho alert to danger; her captain-Commander John S. Phillips-got her underway and maneuvered safely through the Japanese fire, concentrated on the battleships moored at Ford Island, to a safer area of the harbor. Her guns fired throughout the attack, splashing one enemy plane and driving off others. Three of her men were wounded by a strafing attacker.

For the next five months, Neosho sailed with the aircraft carriers or independently, since escort ships-now few and far between-could not always be spared to guard even so precious a ship and cargo. Late in April, as the Japanese threatened a southward move against Australia and New Zealand by attempting to advance their bases in the Southwest Pacific, Neosho joined Task Force 17 (TF 17). At all costs, the sealanes to the dominions had to be kept open, and they had to be protected against attack and possible invasion.

As the American and Japanese fleets sought each other out in the opening maneuvers of the climactic Battle of the Coral Sea on 6 May 1942, Neosho refueled the carrier Yorktown and heavy cruiser Astoria, then retired from the carrier force with a lone escort, the destroyer Sims.

Next day at 10:00, Japanese aircraft spotted the two ships, and believing them to be a carrier and her escort, launched the first of two attacks which sank Sims and left Neosho-victim of seven direct hits and a suicide dive by one of the bombers-ablaze aft and in danger of breaking in two. She had shot down at least three of the attackers. One of her crewmen, Oscar V. Peterson, was posthumously awarded the Medal of Honor for his efforts to save the ship in spite of his severe injuries suffered in the attack.

Superb seamanship and skilled damage control work kept Neosho afloat for the next four days. The sorely stricken ship was first located by a RAAF aircraft, then an American PBY Catalina flying boat. At 13:00 on 11 May, the destroyer Henley arrived, rescued the 123 survivors and sunk by gunfire the ship they had so valiantly kept afloat against impossible odds. With Henley came word that the American fleet had succeeded in turning the Japanese back, marking the end of their southward expansion in World War II.

Mrs Harry Bradshaw received word Monday from the Navy Department that on May 8, 1943, he was officially declared to be dead.  He had been reported missing since May 8, 1942 when the tanker, Neosha, was sunk in the Coral Sea.  Harry was in Charge of laundry on the Neosha.  With the official declaration of his death, was a message of sympathy from Secretary of the Navy, Frank Knox, which read as follows:  "I extend to you my sincere sympathy in your great loss and hope you may find comfort in the knowledge that your husband gave his life for his couuntry, upholding the highest tradition of the Navy.  The Navy shares in your sense of loss of his service.

My heart felt heavy for Jeanette who really never got a chance to start her life with Harry. I thought of the power of young love and how all of her hopes and dreams were dashed as it would for too many other young wives  She'd remember Harry, though, through the eyes of their child, Dennis, who was born nine months after that leave. Jeanette remarried many years later and died in 2004 in New Hampton, IA.