Jacob Smith: Bits and Pieces for Discussion Including the Custer Connection

I've been incredibly frustrated by my inability to move my SMITH line beyond 3GG Jacob Smith and
his purported father, James Smith. Anectdotally, James is Jacob's father and they were originally from the Monmouth, New Jersey area before moving to Ohio somewhere before 1830.

Also, little is known about Mary Catherine Randolph, Jacob's wife, who went by "Cathy" from what I've learned. Jacob's son, John R. Smith married Susan Randolph, who I will guess is a relative of Cathy, but again, I have nothing. I've got a couple lines of inquiry I'm pursuing, but records are spotty in the wilderness during this time and without birth or death records, it's going to be non-definitive, even if I feel I've solved it.

One thing of the family legends I was able to confirm is that my 2GG, William Custer Smith, did indeed most likely get his middle name from George Armstrong Custer's father, Emanuel Custer. The legend had it that the Custer's were great friends of the Smith in Rumley Township, Harrison County and sure enough, I find them both living there in 1830.  Emanuel and Jacob were contemporaries.

A Little About EMANUEL CUSTER

Emanuel Custer was born and raised in Allegany County, Maryland. He was born 10 Dec 1806. His
first wife was Matilda Viers, whom he married in Maryland in 1828. They had three children, two of whom died young. Upon Matilda's death in 1835 in Harrison County, he married Mary Ward Kirkpatrick in 1836. The couple had at least seven children and widow Mary brought a daughter to the marriage. The two oldest, James and Samuel, died before their first birthdays. The arrival of George Armstrong Custer, later youthful West Point grad and Civil War Army General; and later yet, failed battle strategist at Little Big Horn, was the oldest of Mary's surviving children.

Emanuel and Mary were settled in Harrison County by 1830. After serving in the US Civil War himself at a quite advanced age in his 60s, he and his wife moved to Monroe County, Michigan, where they both died. The Smith's moved on to Grant County, Wisconsin in the mid-1840s.

In between, though, the Custer Family rallied at the time of the Civil War and beyond as part of the Cavalry. Four members of the Custer's immediate family died at the Battle of Little Big Horn:  Brevet Maj Gen (Lt Col) G. A. Custer, his brother Boston Custer, brother Capt Thomas Ward Custer (two-time Medal of  Honor winner), and brother-in-law, Lt James Calhoun, husband of Margaret Custer, along with nephew Harry Armstrong "Autie" Reed (a non-military member of the group) and other Custer friends. The historical perspective of G. A. Custer has been tipped on its head in the past decades as the "heroic" nature of their deaths at the hands of Chief Sitting Bull and his army of Native Americans, but it was surely a profound loss to Emanuel and Mary Custer which ranks up there with the tragic loss of the five Sullivan Brothers of Waterloo, IA during WWII in terms of family service tragedy. 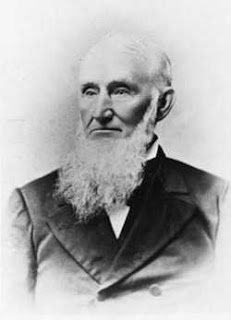 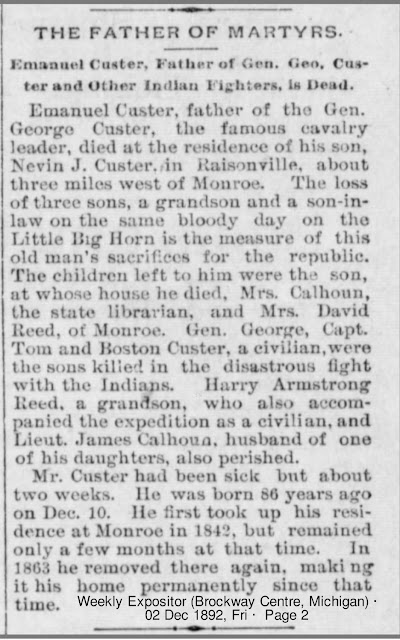