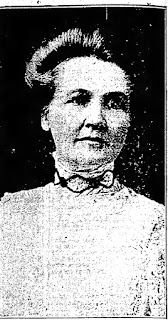 A long time ago, I talked about the Simmons family which had its roots in the family of the sister of my 2nd great grandmother, Mary Ann Munson Smith. William Wallace Simmons and his wife, Alice O. Carpenter, married in 1889, the same year the first White settlements started in Oklahoma City. In 1901, the couple and their only child, Merle Phillip Simmons made the trek from Iowa to Oklahoma City where they established their household. Oklahoma City was still young.

Alice Simmons opened up a bakery in 1913, which started by baking four loaves of bread per day. It grew over the course of time to a very large bakery serving the entire city. William Wallace Simmons died suddenly while on a business trip in 1915. Mrs Simmons kept on growing her business when WWI took her son for service in France. One of his letters home to his mother made the Daily Oklahoman paper.

Received your Christmas box about three weeks ago. We have nothing to worry about 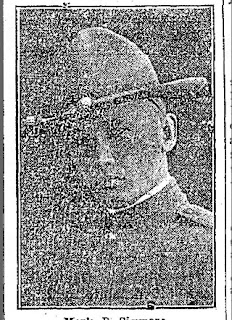 over here as we are comfortably located, have warm weather, and lots of work to do, a place to sleep, something to cat and no place to go, so why should we worry?

France is very interesting, especially are the quaint customs. The roads are of gravel and clay and are in fine shape for motoring as they are so smooth. There are no mud holes or ruts. All over France the roads seem to be the same. A hard sandstone lays just beneath the top soil. Timber is very scarce and as a result the people naturally build their homes of stone and whatever is built of this material lasts forever, it seems. All along the roads are stone walls, three to four feet high. They also surround the farms, which are small and irregular. If stone is not used, a thick hedge is grown. And when you look into the valleys from the hilltop, it is easy to pick out each individual farm. There is not much waste land as the farms are kept clean and in excellent condition.

Grape vineyards appear to be plentiful as the French seem to be great wine drinkers. The Frenchman's wine to him is as necessary as beer to a German. The farm houses are large, built of stone, with a red-tiled roof which is usually covered with green moss. The house is usually two stories and connecting on one end is a barn and the other a porch or shed used for drying corn, beans, and the like. The farmer wears a loose-fitting work shirt which slips on over his head and is fastened with a draw string around his neck. He wears these instead of overalls. Wooden shoes are very popular.

On market morning the farmer and his family get into a two wheeled cart and go to town. There seem to prefer the carts. Geese and p*** are about all they bring to down now as it is spring and most of the cr**** have been marketed.

I guess we will be paid in a couple of days? We are all broke because we haven't been paid for two months. It is one way to save money, because when a fellow gets broke he can't spend and he can't find anybody to borrow from.
Merle P Simmons
The Daily Oklahoman
(Oklahoma City, Oklahoma, Oklahoma, United States of America)
10 Mar 1918, Sun  •  20

Her reputation in the city for her business acumen was growing and her activities frequently made the society pages of the Daily Oklahoman. In 1925, she remarried Mr Horace W. Hakes. The divorce of the Hakes', which occurred during Mrs Simmons final illness in 1938, included a financial settlement of undetermined amount to Mr Hakes. Mr Hakes blamed his stepson, Merle, for his marital troubles. Merle had been slowly taking over the business the past few years and Mr Hake's opinions on the course of the business were ignored.

Mrs Simmons passed away on 13 Mar 1939 from her long illness. She left her son, Merle and his wife Esther Day and their three boys, Merle Jr., William Wallace, and Robert Day. A daughter, Betty Lou, died at 17 months in 1923.

Two of Merle and Esther's boys, Bob and Bill's weddings made the society page. Son Merle Jr. worked with his father in the bakery business, but never married. The advertisements I found for the business ended about 1949.

Bob served as a pilot in the US Air Force. He later worked from Superior Oil and then with Prudential Bache Brokerage Firm, and then worked as an independent oil and gas broker. He and his wife, Sue Ellison, had four children. He died in 1997. Bill married Sarah Jo Durland and they had two children. I don't know a lot about him, but he for several years worked as the North Texas State University as associate director of admissions. He died in 1971 at the young age of 41. 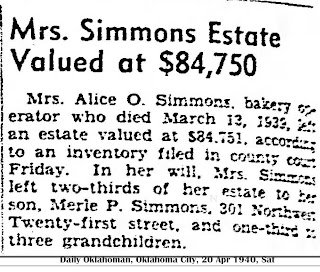 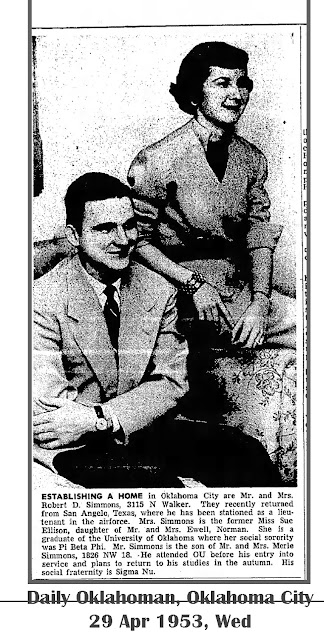 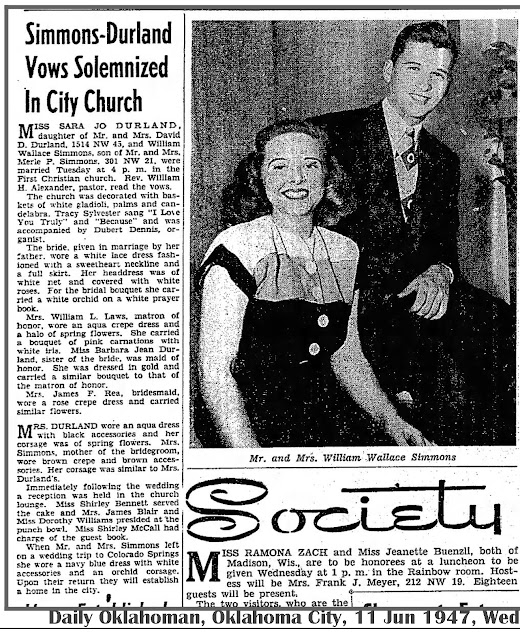