I had waited a long time to take a DNA test, but I ended up taking two. Ancestry.com and 23andMe. In the first, I discovered a second cousin, whose mother was the child of one of my great uncles and was given up for adoption. That was a little mind-blowing.

Then, I got my 23andme results and danged if I didn't run across a heretofore unknown first cousin. I shared a large first cousin-sized bit of DNA with him and immediately contacted him. He hadn't really been interested in seeking out any bio family, because his adoptive parents provided him and his sister a wonderful home and life. But...maybe he had siblings. He had been talked into doing the test.

I contacted the three first cousins I gained last year who were most assuredly his siblings and they are waiting for the results of a DNA test of their own to confirm the connection. I really have no doubt since Joe, our newest cousin, comes complete with a court record with his birthmother's last name.

I think, based solely on the results of my family, that there must be a lot of mind-blowing going on all over the country over other people's own results. Many secrets are being revealed. Some might cause additional heartache - some may be joyful news. The way I look at it, I'm glad to have a new family member and hope he has a chance to join us for our next reunion.

He's a storyteller, and you know I love that. 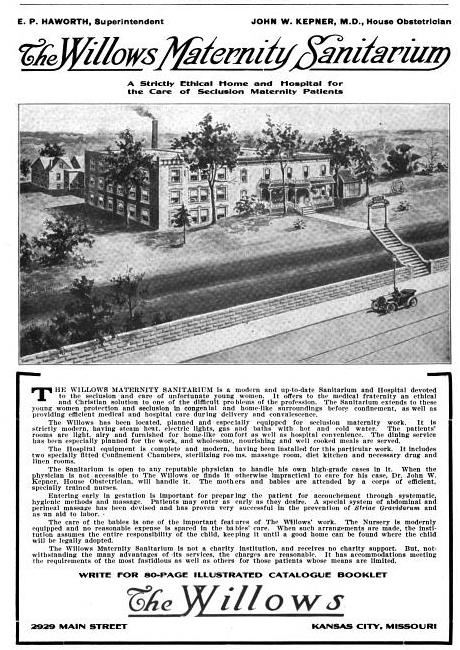 Hang Down Your Head, Frank Doole

I have been digging away at various pieces and parts, hither and yon, and took a second look at this fellow who had married three times - two of those times into families that are connected to me.  He seems like less than a pleasant character, but a character for sure.

Francis Doole was born 20 Jun 1823 in Antrim, Northern Ireland. His wife, Martha Shaw, born in 1825 in Ireland, traveled with him to the United States, arriving 25 Dec 1843 in New York City. They moved to Ware, Massachusetts, where they became US citizens in November of 1854.

Their daughter, Mary Jane, was born in Ware, but by the time the first of their three sons came along in 1854, the family was in Floyd County, Iowa, which is a hop and a skip from both Bremer and Butler counties.

Lydia was born about 1839 to George Richard Hinmon and Anna Lewis in Erie County, Pennsylvania. Her first husband, William Stuck, died during the Civil War. They had been married in 1855 and he died in late 1863. They had one son. She married George Harshman next, in 1866, and it appears that marriage ended in divorce. George seems to have moved on from Iowa, where several Hinmon's had settled and headed West to Nebraska. Lydia then married Francis Doole, widower, on 05 Jun 1880 in Floyd County.

The 1880 Agrigultural Schedule 2 of the Census indicated Doole was fairly successful. He owned 130 acres of farmland in Floyd township and his farm was valued at over $5,000. Just looking at the record, it seemed all was pretty normal.

Things changed - he had fractious relations with his children which culminated in the following event involving the desecration of wife Martha's grave: 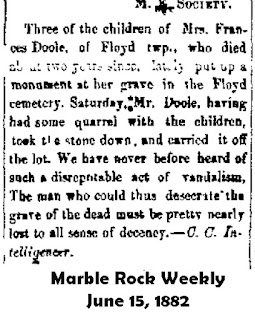 I have not discovered whether Lydia died or they divorced, but Doole married my 2xGG William Custer Smith's sister Sarah Jane, a long-time spinster who had spent many years living with her mentally disabled brother and mother and big brother WC Smith and his wife Mary Ann. That marriage occurred in 1887. In 1888, Frank made the news again:

"A "Blind Pig" which has been successfully operated the past two years at Floyd by Frances Doole, was raided and a large quantity of beer and whiskey seized. Doole is in jail at Charles City.

I wasn't able to find out what happened to this case, but perhaps it led to the divorce that followed between Aunt Sarah and Doole. It was a sad situation for Sarah, who had been cared for by her relatives her entire life. She was left without a place to go after the divorce, and ended up residing in the Bremer County Poor Farm and Asylum for the rest of her life, dying there in 1924.

What's a blind pig? In the Midwest, Blind Pigs started in the 1880s and were quite a problem, according to the anti-alcohol crowd. It got it's name because some wily proprietor would sell tickets to a back room to see a "blind pig," and the ticket price included a drink.