SIDEROAD: Discovering My Son's Other Father

I am a proud adoptive mother. My ex-husband and I adopted three amazing kids. My oldest boy, now 31, asked me after last Christmas to help him find his birthfather. It was an open adoption, and we know where his birthmother is, but contact from her has been limited. The birthfather was only a name, and my memory of him as he and she handed their little baby to my ex and I on that life-changing day at the Western mobile home office of the Nebraska Children's Home Society in Bayard, Nebraska on that October day in 1990. I also had a handful of photos the birthmother had provided for my son's photo album.

The birthfather had a relatively common Hispanic name so I knew I had my work cut out for me.  We had my son's DNA in 23andMe, so I had some helpful hints, but absolutely no context into which to put the information. My search skills are advanced and I also had one other piece of information I remembered from the day we all met - he was moving on to Texas to join the rest of his family who had relocated.  Thirty years though.  Still, what are the chances?

It took me about a month of sifting and message-sending to various DNA-related people until I got a response from the son of one of the people I'd messaged.  We had a good long talk and he filled me in on the greater family history.  The family was originally located in Neuvo Leon in Mexico. Over time, some folks moved north of the current border of Texas and some did not.  They were all descended from Spanish settlers who settled the area and typically intermarried with other Spaniards and tended to have lighter complexions.  I got a lot more history, but I still was stalled out on the hunt. This cousin providing the information knew of the line I was looking for, but did not know much else. Four months passed with no progress.

Sometimes, I count on what I call my "spidey senses" to figure out a problem. That little signal that shoots through me when I'm sure I'm onto something. One day, while searching the same search terms for the twentieth time, my spidey sense started to tingle.

I ran across an article about a man with the name I was looking for. Then I saw his photo and I saw my son in his face.  That was totally weird.  Let me tell you.

I hunted down an email for his business and sent a short note along with some photos of when the birthfather was a young man. I heard back from his niece, who works for him.  She played go-between for the next few emails. He took a DNA test and all was confirmed. I never spoke to him myself, but was able to connect he and my son and a fledgling relationship began.

They texted for months. Then birthfather visited. Then a half-brother visited. Then my son and his family went to his half-sister's quinceniera where he met his biological grandparents, siblings, aunts, uncles, and his birthfather's wife. They felt welcomed and loved. Their relationship continues. I am thrilled for him. 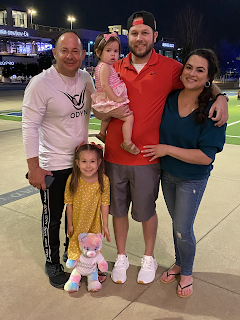 My son is very close to his father, the man who raised him. But, it's got to be kind of weird for him. I hope my ex realizes my son doesn't want to replace him, but needs this relationship. My son is a little weirded out that his birthfather never asks any questions about his childhood or if he was happy. I found that comical since my son is never one to ask any extra questions or share his feelings without something quite compelling driving him to do so.

They walk the same. They both pass out when they see a needle or blood. Their bodies are shaped the same and they share the same nose and dimples and the cleft in his chin. It's fascinating to watch. Somehow, my son is finding space in his life and his heart to fit in a passle of new siblings, another set of parents, and keep those of us who've known him his whole life close.  I'm pretty proud of him.