Johnathan Woodington (abt 1800 and Sarah Ann Wayman (abt 1818) had a very large family and lived primarily in the Philadelphia area for much of their lives. One son, Moses, married Henrietta Munson - the younger sister of my 2nd great grandmother, Mary Ann Munson, who moved with her family to the Eastern District of Wisconsin in the 1840s from Trumbull County, Ohio.

Moses' oldest brother George, left Pennsylvania as well. He headed down to the Woodbine in Jo Daviess County area of Illinois, near the great Mississippi River sometime after 1860 from Elizabeth in Bensalem Township, Bucks County where he had been living with a cousin's family and working as a day laborer.

On 26 Jan 1865, he married Margaret Alice "Alice" Neal in Jo Daviess County. Three children would be born to them there: Edwin, William Wallace, and Harry. B. In 1870, he visited California for the first time. His dream became to move there permanently. In the meantime, the boys were born and he farmed.

Over 8,000 years ago, the earliest known settler here were the Oak Grove people. They abandoned the area when food sources dwindled and the temps became too dry. According to the Westminster website:


"The area remained uninhabited until the Gabrieleno Indians moved in from the desert to this area and numbered over 200,000. Diseases such as measles, smallpox and diphtheria reduced the Indian population.

The next recorded history of the North Orange County area dates to 1492, when Pope Alexander IV decreed that all unclaimed land in the North American continent belonged to the King of Spain. Large land grants called ranchos were awarded by the King to induce colonization of the continent. The Spaniards cleared, surveyed and mapped their new land. In 1784 the Spanish Governor of California honored Manuel Nieto with a 21 mile square concession of land to be called the Rancho Las Bolsas. It covered most of what we know today as west Orange County. The Rancho prospered with large crops and fine herds, however, after Nieto’s death in 1804 his heirs quarreled and the Rancho was partitioned in 1834.

During the 1850’s with California’s admission to the Union, the U.S. Land Commission was set up to review claims that rose from original Spanish land grants. An American named Abel Stearns saw this as an opportunity to buy up shares from the disputing factions of the Rancho Las Bolsas. With the Commission’s acceptance, Stearns became the sole owner of the rancho changing the name to Stearns Rancho."


Westminster was set up in about 1870 as a "temperance colony" by a Presbyterian minister who purchased 6,000 acres. This is a community that prohibited the sale or use of alcohol. By 1872, the first school had opened and by 1874, the first general store. It was a brutal agricultural terrain (part of the reason many Indians left the area long before) with swamps, tulles, and flooding due to the lack of irrigation. By 1881, with the passage of the Irrigation Act, thousands of acres were turned into usable ag land. He had been engaged in farming the greater part of his life and during the fourteen years of his residence in California, he worked as a farm laborer in many quarters, most extensively on the Bixby Ranch and later raised grain on the San Joaquin (Irvine) ranch - two of the largest ranches in California. He never worked his own land while in California, beyond family sustenance.

George lived here until his death in 1905. Alamitos Cemetery would later become Magnolia Memorial Cemetery. His wife, Alice, would live on until 1920. His son Harry would stay on in the area and will be the subject of the next post (along with info on his long relationship with "The Celery King." 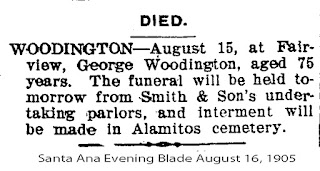