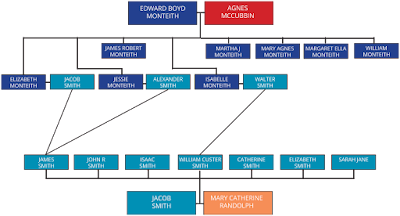 Edward Boyd Monteith was born 12 Mar 1822 in Penninghame, Wigtownshire, Scotland to Andrew Monteith and Isabelle Hendry. The elder Monteith was "ag lab" or agricultural labor on the Merton Hall estate, owned then by William Boyd, then his son Edward Boyd, in Newton Stewart parish in Penninghame. This was hard work, with few financial rewards and it's totally understandable that the adult children of Andrew and Isabelle would start trickling over to the US for a better life.

Edward and his wife, Agnes McCubbin, who he wed in Scotland, first stayed in Vermont for three years beginning in 1848 and then moved on to the budding frontier in Wisconsin. First, they stopped in Jefferson, Ohio, then on to Janesville, Wisconsin, then moved on in 1854 to Platteville. Edward was a stone mason by trade and helped build the State Normal School building in Platteville. They had a small farm in Liberty Township and eventually, purchased a farm in March 1869 from James McCubbin in Section 30 in Wingville Township, near Monfort, Grant County. In 1877, the plat maps shows he owned 193 acres. They later moved to Fennimore.

Edward and Agnes had seven children:

1, Elizabeth: Born 19 May 1847 in Wigtownshire, Scotland. She married Jacob Smith on 15 Nov 1866 in Fennimore, Grant County. Jacob was born 04 Feb 1843 in Jefferson, Ohio to James Smith and Susanna Johnston, Jacob served in the 7th Wisconsin Infantry, Company H, with three of his uncles. He was mustered out on 13 Jul 1865. The family retains his Civil War musket. The family moved to the Polk Township, Bremer County, near the town of Plainfield in the 1860s, along with other family. They spent the remainder of their lives there with the exception of four years spent in South Dakota. They had three children. Jacob died 08 Jul 1916 in Bremer County. Elizabeth Monteith, well loved by those who knew her, survived until 16 Jan 1943 in Plainfield, where she died at the home of her daughter, Agnes Smith Hinmon.

2. Jessie: Born 25 Sep 1851 in Barnet, Caledonia, Vermont, she married Alexander Smith on 25 Dec 1866 in Grant County. Alexander was the son of James Smith and Susanna Johnston. He was born 16 Jun 1845 in Steubenville, Ohio to Jacob Smith and Catherine Randolph. They had a life full of pioneer adventures which are outlined here. Alexander died 24 Aug 1925 in Brook Park, Pine, Minnesota and Jessie died 21 Jan 1939 in Princeton, Mille Lacs, Minnesota. They had three children who settled in Minnesota and Canada.

3. James Robert ("Jim"): Born 31 Jan 1853 in Janesville, Rock, Wisconsin. Elizabeth A. Barger was born on 28 Dec 1854 in Wingville, Grant County. They married 24 Nov 1875 in Montfort, Grant County.  They had 12 children, two of whom died in infancy. One of the surviving children, Fred, died tragically in a drowning which also took the life of his sister's husband. You can read about it here. Elizabeth died 20 Oct 1923 and Jim died 30 Jul 1949 in Fennimore.

4. Isabelle:  Born 25 Oct 1854 in Grant County. She was married to Walter Smith, son of William Custer Smith and Mary Ann Munson, on 29 Oct 1876 in Plainfield, Bremer County, Iowa. You can read about Isabelle and her family at the Walter Smith link above. Isabelle died 27 Oct 1938 in Nashua, Chickasaw County and Walter died in Nashua on 23 May 1930.

5. Martha: Martha was born 09 Aug 1857 in Grant County. She married James Woodward Preston on 24 Dec 1877 in Plainfield, Bremer County, Iowa. James was part of the sprawling Preston family of Grant County. I wrote about his half-brother, Matthew Preston, here. Martha and James resided initially in Grant County, then moved to the Duluth, Minnesota area and farmed there. Martha's sister Jessie and husband Alexander also lived in this area. James died 06 Nov 1932 in Duluth and Martha died 16 Nov 1946 in Proctor, St Louis County, Minnesota. They had one child, Willie, who died as an infant.

6. Mary Agnes: Born in 1860, she married John Thompson Preston, brother of James. They moved to Howard County, Iowa after 1880. They had two children, Edwin James and Jessie Maud, before Mary died  in 1886 in Howard County. John lived with his brother and sister-in-law, James and Martha in Duluth in 1900, but moved to Proctor in St Louis County by 1910. He died 18 Oct 1927 in Proctor.