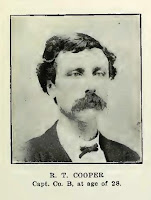 Many moons ago, I had researched Capt Robert T. Cooper, stalwart and engaged citizen in some detail. You can read about it here. Doing the research is NEVER done. I do a round of research and then start all over again to see what new tidbits have been added to the volumes I've already collected.

I had already discovered that he lost his wife early in their marriage. I knew of some of his business dealings and his war record, but discovering his obituary recently filled in some of the blanks.

If you remember from reading about the Cooper's trip west, they were a Quaker family who left Pennsyvlania to go to a Quaker settlement at the edge of Crawford and Clark Counties, Illinois, where the pioneering journey of the family begins.

Nephew WW Fisher, a veterinarian, seems to have enjoyed his uncle's company. Joseph Cooper had early on worked with his brother Robert in the milling business when he was a tinsmith. He lived a full, fruitful life, but one without a life's companion by his side. Always kind of made me sad for him.