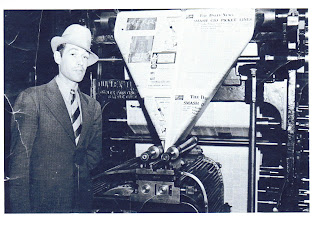 Leo Lee Linsey was born the oldest child of Florence Miller and Charles Lindsey (later Linsey) on 18 Jun 1904 in Benton County, Iowa. Florence was a farmer's daughter, having been raised in the rural Benton County area prior to her marriage. They resided at 410 11th Ave in Vinton, Iowa.  They would have two other surviving children; Lucille and Charles, Jr. who went by "Junior" his entire life.

Charles was a working man, working various jobs and spent the last 12 years of his life working on a section gang for the railroad. 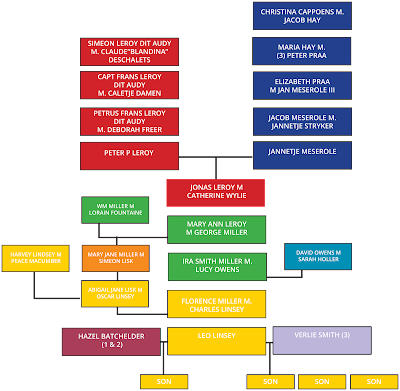 Leo would grow up to be a pressman, but also was a sales delivery man for a company for a while. He spent his longest working stint with a printing company in Waverly, Iowa until his retirement. On 12 Apr 1930, he married Hazel Batchelder in Vinton. She was the daughter of Lottie Berry and Lester Batchelder. From this point, things get dodgy. They filed for divorce in 1935, each slinging accusations at each other which made the paper in great detail and the wife requesting Leo be institutionalized (mostly likely for alcoholism). Eventually, the request for commitment was dropped, a demand was made by the court that they stop slinging mud, custody was awarded permanently to Hazel's mother of the son. Leo had very little contact with his son from then on. That son had a successful life and looks back very fondly on his grandparents who raised him. Hazel and Leo were divorced at last in 1936 for the 1st time. 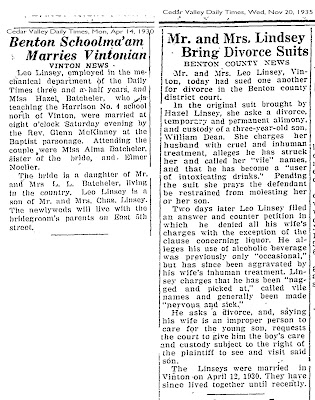 But, lo and behold, come just months after the protracted legal battle, they announced their intention to marry again. I'm guessing this engagement was on and off until they finally remarried on 12 Dec 1936. They separated within months, but did not divorce immediately. 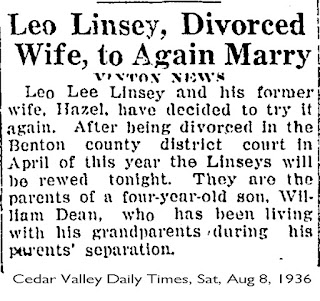 By 1937, Leo was living and working in Waterloo, Iowa. He began cohabitating with Verlie Smith Michaelsen sometime that year. Both were still married. Verlie's husband finally filed and was granted a divorce in 1941 and he remarried in April 1942. It is presumed that Leo's divorce from Hazel was finally finalized sometime prior to her marriage to Jack Ritzman in the mid-1940s.

Verlie's relationship with her first husband, Ted Michaelsen, was marred by spousal violence and alcoholism. It was also the depression and things were very dire financially for her. Verlie had four children by her first marriage. Many children ended up in orphanages during this time as many did not have the means to even feed the children. Three of the children of this union were adopted by various family members after stays of various lengths in the Bremer Lutheran Children's Home, and the youngest was adopted to a well-to-do Lutheran couple. Two girls were adopted by a paternal aunt and uncle and the oldest was adopted by a maternal aunt and uncle. After extensive conversations with the children of the first marriage, one can only presume that while difficult for all involved, the children ended up in safer, more stable environments. All but one of the children of that marriage maintained a relationship with Verlie her entire life. 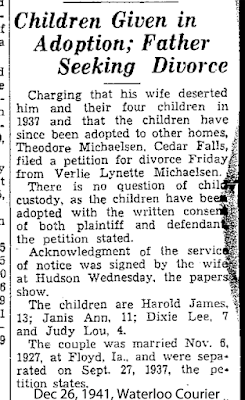 Leo and Verlie had three sons between 1939 and 1944. The couple did not marry until 1965, when they drove up to Minnesota and tied the knot 12 Jul 1965 in Fillmore. Leo reportedly wanted to ensure that Verlie was able to get his Social Security. They generally lived on the edge financially their whole lives. Near the end of Leo's life, which had ritually involved stopping off at the tavern after work and after getting a paycheck, he and Verlie separated. Their decree of separate maintenance appeared in the Marriage Dissolutions column in the Waterloo Courier in 1975 and terms were, "She gets household goods and furniture, he pays debts incurred during their marriage." He died on 04 Feb 1980 in Waterloo of a heart attack. His final years were spent with his companion, Elsie Stoner. Verlie lived on until Nov 1986 and died at Ravenswood Care Center in Waterloo. 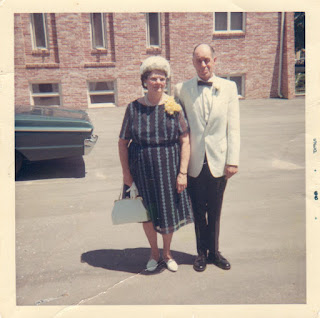 I have incredibly fond memories of both of my grandparents. Leo was quiet and smoked stinky green cigars outside. He affectionately called me his "Little Kraut" because I was born in Germany. He mostly liked to sit back in his recliner and watch Lawrence Welk on Saturday nights. Grandma made the best fried chicken dinners and a had a little candy dish on her buffet waiting for all of us when we came for Sunday dinner after church. She was the typical grandma, baking and cooking her way into each of our heart's.

It's much easier to step back and look at their lives from a dispassionate perspective now, with them both gone for over 30 years. They made a lot of probably not so good choices in their lives, but managed to have a bunch of kids between them that did what America is great for -  providing opportunity for each to find their own success and doing it better in the next generation.
Posted by Me. Here. Right now. at 7:02 AM