These four daughters will be the basis for the next few posts. 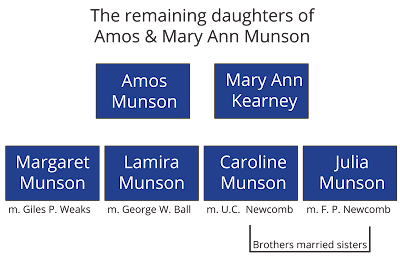 George would marry again to Caroline Key McCallister, originally of Canada and the widow of Nathan McCallister. She had two children. The Ball's would go on to have Henry, Ida, Dora, Lenna, Forest, Wyman, and Lee Ball. Caroline died prior to 1900 and George died after 1910 in Seattle, Washington where he lived with his daughter Ida and her family.

I'll cover the Uri Sr. Newcomb family of Montrose, Susquehanna, Pennsylvania in more depth in a coming post as they play an important role in the Munson history. 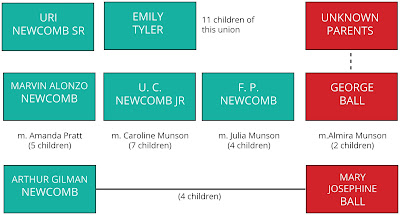 This bio was published prior to son George's death:


A. G. Newcomb, harness maker, now owns the business which was established by himself and father, November 23, 1874. This is the longest established business of the kind in Traer. The present building was erected in 1875; and in October, 1879, M. A. Newcomb, father of A. G. and senior member of the firm, retired and left the business entirely for his son. M. A. Newcomb came here, from Tama City, in the spring of 1873. He was one of the early settlers of that city and its first Mayor. A. G. was born in Susquehanna county, Pennsylvania, in 1851. He came to Tama City with his parents in 1867, and there learned his trade. His uncle, U. C. Newcomb, opened the first harness shop in Traer, in the spring of 1873. A. G. worked with his uncle till the spring of 1874, then opened a shop in Dysart, which he ran till in November, when his father and himself opened their shop in Traer, as above stated. M. A. Newcomb removed from Perry township to Waterloo, thence to Waverly, Bremer county, this State, and from there moved to Michell, Dakota. A. G. Newcomb married Miss Josephine Bull (sic), a native of Wisconsin, and daughter of G. W. Bull (sic), now of Minnesota; her mother is deceased. They have had four children, three of whom are now living: Myrtle C., Earl and George M. Maud is deceased.

By 1900, they were living in Silver Creek, Sanborn County, South Dakota. By 1910, they had joined several other family members in Woonsocket.  Arthur died in 31 May 1912. The 1920 Census has Josephine living in Spokane, Washington with son Earl's family. And, in 1930, she was back in South Dakota, living with her granddaughter Mary Ferne Cox McDonald in Washington Springs in Jerauld County. She continued living with Ferne and family through the 1940 Census. She died 29 Jun 1941, presumably in South Dakota. They had four children: Myrtice "Mertie" Newcomb Cox, Maude (who died as an infant), Earl Aubry Newcomb, and George Martin (who died at age 11 in 1891 in Tama County, Iowa). 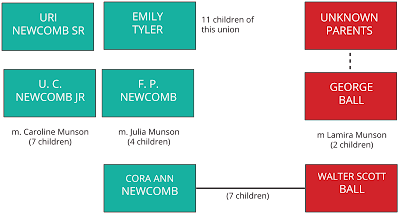 Walter Scott Ball was born 17 Nov 1861 in Fennimore, Grant County, Wisconsin. On 16 May 1889, he married Cora Ann Newcomb (born 29 Dec 1869 in Tama County), daughter of Frederick Porter Newcomb and Julia Munson in Woonsocket, Sanborn, South Dakota. In 1900, they lived in Woonsocket and Walter was a dry goods salesman. He continued as a commercial salesman in 1910 and they lived next to sister Josephine. In 1920, he was back in the harness making business and owned his own shop in Woonsocket. He was retired by 1930, but two of his sons and his wife resided with him. In that year, he died:


WS BALL DIES AT HIS HOME IN WOONSOCKET

WOONSOCKET, April 14 - Special - WS Ball, a resident of Woonsocket since 1883 died at his home here Saturday night following a paralytic stroke. Mr Ball, who ws 68 years ago at the time of his death had been in apparently good health, bud had suffered strokes previous to the one that caused his death. He had been up town earlier in the evening.

Surviving Mr Ball besides his widow are six sons, Harry of Minnesota, Arthur, Earl, George, Clifford, and Carroll of Woonsocket and a daughter Mrs Cleo Roach, also of Woonsocket. Funeral services will be held Tuesday afternoon at 1:30 o'clock from the family home with the Rev Mr Hoyer of the Methodist church in charge. Interment will be in Eventide.

Cora lived until some time after 1940 and lived with daughter Mrs Harry (Chloe) Roache as of the 1940 Census.

Note: Woonsocket was a little boom town when it was first settled. It was noted for its many artesian wells, which provided ample water for the farmers in the area. 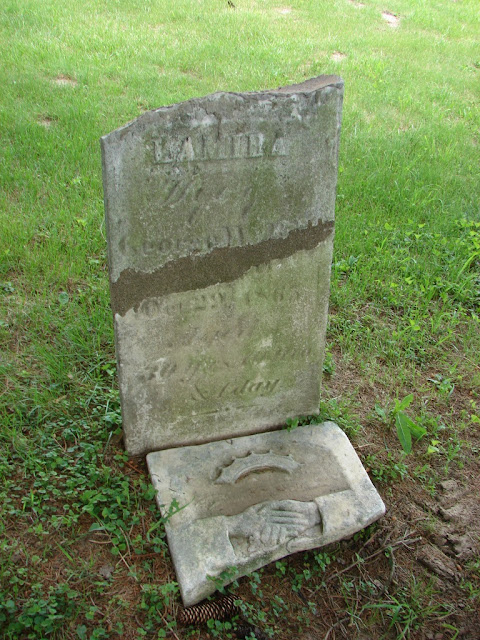