Mystery Muddle: Who is Rebecca Cronoble? 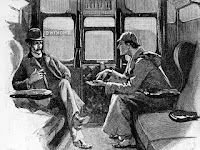 Our brothers Smull, of Centre County, can be learned about here.

Peter Smull, one of the four brothers, had 12 children, including Peter L Smull was born in about 1833 in Centre County, Pennsylvania. He moved to Stephenson County, Illinois in the early 1850s. In 1861, he married Rebecca Cronoble.

Rebecca also hailed from Centre County. The mystery is in which Grenoble/Cronoble branch did she come? Here's a little summary of my findings, but this mystery has yet to be solved.

It's my belief that the originating immigrant is Johann Jacob Grenoble, born in 1702 in Germany and who came to Philadelphia in 1743 with his infant son, Lorentz and wife Agnetha. Daughter Anna Barbara did not survive to make the trip and died before age 2. Some reports say Agnetha died before the trip, but I cannot yet confirm that fact. Johann remarried (this is in itself another mystery for another day) to the widow of  Johannes Beverts.

Lorentz married Sabina Fruh. They had four children. The surviving male was Jacob, born in 1775 in Lehigh, Pennsylvania, who in turn married Katarina Willeman about 1794. They had 10 children.In that bunch, we start to see the reversion of the last name from Grenoble to Cronoble (the original German name) and Crownoble. While several of the children remained in Pennsylvania, one moved to Stephenson County, Illinois - George W Grenoble/Cronoble who married Sarah Runkle.


I've located eight children of this union, but no Rebecca in the bunch The Rebecca's among the other descendants are not possibly Rebecca Cronoble Smull.

Records I am currently able to locate leave me with this hypothesis: Rebecca is either Elizabeth or Margaret, born in 1833 and 1835 respectively. There is evidence that Jacob, and possibly John also made the trek West later, but based on timing, marriage year, etc., I believe Rebecca to be a child of George.

I would love, love, love if someone has some thoughts or their own theory or information to support this hypothesis.

Peter L Smull died 13 Sep 1900 in Stephenson County at the home of his sister, Mrs Matilda (Daniel) Meyer. We don't know when Rebecca died, or anything really, about how she lived either. I'd like to give her some identity beyond a name that may or may not be correct.