Charles Edward Gaither was born 14 Jan 1892 in Warren, Ohio to James E Gaither and Clara Gentholtz. You can read about her and one of her other children here.

When Charles was a young boy, his father gave him a copy of the book, "Life in the Ozarks," which stuck with him and would help guide his future and lead him to the place he always wanted to see.

At age 21, he had a brief marriage to Grace Miller. Then, he spent a lot of time in orchestras throughout the country. His instrument of choice was the violin. He led orchestras from the age of 15 and was also a member of the Penn Albert Trio in Greenburg, Pennsylvania.

While living in Uniontown, Pennsylvania in 1924, he read in the Billboard that the Miller Theater in Jefferson City wanted an orchestra leader. Charles telegraphed and was accepted, leaving immediately by train. Once in St Louis, he hopped the Missouri Pacific and arrived in Jefferson City. He fell in love with the area immediately and made it his permanent home. His hobbies were fishing and motorboating - and he'd ended up in the perfect place, near the "Big Muddy" to enjoy both to their fullest.

While working later at a theatre in Springfield, he married Martha Roedder. Martha, of Jefferson City, was his fiance when Charles was taken ill and spent several days in the Springfield hospital. Martha went to visit him and they decided to marry immediately, the ceremony held at hospital bedside. Martha was born 16 Apr 1902 to Charles Roedder and Emma Wolff.

When the need for music at the silent movies became unneeded, he made his living from providing music instruction in town and also became the director of the "Little Symphony" - the Jefferson City Symphony, where he stayed until his death. They lived in a new apartment in Jefferson City.

Gaither was interested in both classical and modern music. According to news reports, his orchestra was fairly drama-free and the symphony appearances under his direction were widely praised. He was active in musician's union affairs and was at one time vice president of the union.

After playing a gig at a Boy Scout event, Gaither became ill and it quickly turned into pneumonia. He was put in the hospital and under an oxygen tent, but failed quickly and died on 01 Feb 1938 at the age of 58.

His wife, many years younger than Charles, married Charles Arthur Maxeiner in 1941. He died in 1963. She then married a gent name Welsch. Martha died 21 Jan 1989 in Lee County, Florida. 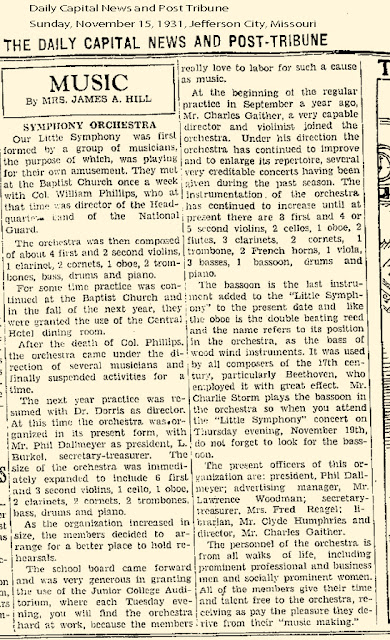